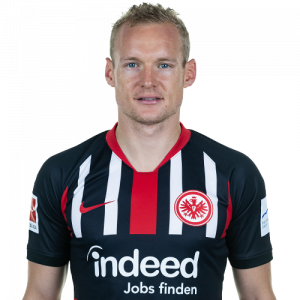 Sebastian Rode (born 11 October 1990) is a German professional footballer who plays as a midfielder for Bundesliga club Eintracht Frankfurt.

Rode made his professional debut for Kickers Offenbach on 7 March 2009 in the 3. Liga – the third tier of German football – against Eintracht Braunschweig.

On 3 June 2010, he left Kickers Offenbach and signed for Eintracht Frankfurt. He made his first appearance in an UEFA Europa League game against Qarabağ FK on 22 August 2013.

On 14 April 2014, Rode signed a pre-contract with Bayern Munich to join them on 1 July 2014 at the end of his contract with Eintracht Frankfurt. He made his debut against Borussia Dortmund in the German Supercup. On 22 November 2014, he scored his first goal for Bayern in home game win against Hoffenheim.The match ended 4–0. Aiding in a Champions League group stage match against CSKA Moscow, Rode scored a header from a corner kick, putting Bayern up 2–0 in a match that would end at 3–0 with CSKA Moscow being knocked out.

On 6 June 2016, Rode signed a four-year contract with Borussia Dortmund. On 14 August 2016, Rode made his debut in 2–0 defeat against his former team, Bayern Munich in the DFL-Supercup. Rode finished his first season at Dortmund with a goal in 21 matches. Rode started the 2017–18 season by losing the German Super Cup. He did not make any Bundesliga or DFB-Pokal appearances during the 2017–18 season. He made two appearances for Borussia Dortmund II in the Regionalliga West during the 2018–19 Regionalliga season.

In the 2018–19 winter transfer window, he was loaned out to Eintracht Frankfurt until the end of the season.

On 27 July 2019, Rode rejoined Eintracht Frakfurt on a five-year deal following a successful loan spell at the club in the second half of the 2018–19 season.