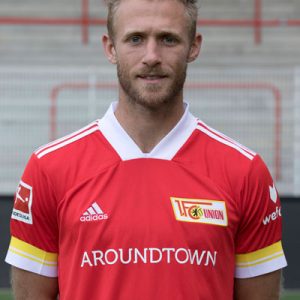 Sebastian Griesbeck (born 3 October 1990) is a German professional footballer who plays as a defensive midfielder for 1. FC Union Berlin.

From 1995 to 2010 Griesbeck played at the Ulm district association TV Wiblingen before he joined the football department of SSV Ulm in 1846. For the sparrows he brought solid performances for three years, which also attracted the interest of other clubs. The defensive player signed a contract with third division club 1. FC Heidenheim in July 2013. On July 20, 2013 (1st matchday of the 2013/14 season) Griesbeck made his first third division game when he played away at MSV Duisburg for 90 minutes in defensive midfield and scored the final score to 1-0 for Heidenheim in the 76th minute. For the 2020/21 season, Griesbeck moved to the Bundesliga for 1. FC Union Berlin on a free transfer.