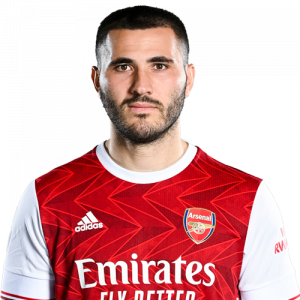 Sead Kolašinac (born 20 June 1993) is a Bosnian professional footballer who plays as a left-back for Premier League club Arsenal and the Bosnia and Herzegovina national team.

Kolašinac began his career in his hometown club, Karlsruher SC. After eight years of playing for Karlsruhe, Kolašinac joined 1899 Hoffenheim, where he played a season before transferring to VfB Stuttgart. A season later, he joined Schalke 04.

After one season with the youth team, Kolašinac was promoted to the second team, Schalke 04 II, in one of the German lower leagues, Regionalliga West. After scoring two goals in seven matches, he was promoted to the first team. On 15 September 2012, he made his Bundesliga debut in a 2–0 win over Greuther Fürth. In December 2012, he played in his first game in European competitions, a 1–1 draw against Montpellier, in the UEFA Champions League.

In June 2013 Kolašinac extended his contract with Schalke to June 2017, but at the beginning of the following season Kolašinac tore the anterior cruciate ligament of his right knee and was out for approximately six months. He scored his first goal for Schalke 04 on 13 December 2015, in a 1–1 draw against FC Augsburg. In May 2017, Kolašinac made the decision not to renew his contract with Schalke 04, thus ending his six-year spell at German club. At the end of the 2016–17 season, he was voted in the Bundesliga Team of the Season.

On 6 June 2017, Premier League club Arsenal confirmed the signing of Kolašinac on a free transfer, pending the “completion of all regulatory processes.”