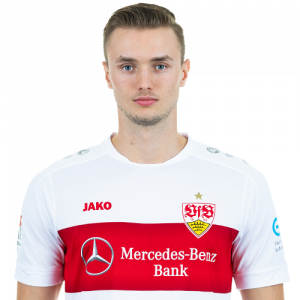 Saša Kalajdžić (born 7 July 1997) is an Austrian professional footballer who plays as a forward for VfB Stuttgart and the Austria national team. He is of Serbian descent.

Club career
Kalajdžić started his career as a professional footballer in Austria for FC Admira Wacker Mödling. Originally playing as a midfielder, he became later a forward. On 5 July 2019, Kalajdžić signed a four-year contract with the German club VfB Stuttgart. On 28 May 2020, he made his debut for the team, coming into the game in the 78th minute of the matchday 28 fixture of the 2019–20 2. Bundesliga season against Hamburger SV, after a break of nearly a year due to an injury (torn cruciate ligament) that he suffered very briefly after his arrival in Germany, in the summer pre-saison training camp.

International career
Born in Austria, Kalajdžić is of Serbian descent. He made his debut for Austria on 14 October 2020 in a Nations League game against Romania. He substituted Michael Gregoritsch in the 90th minute. On 25 March 2021, he scored his first two international goals in a 2–2 away draw with Scotland during the 2022 FIFA World Cup qualification.