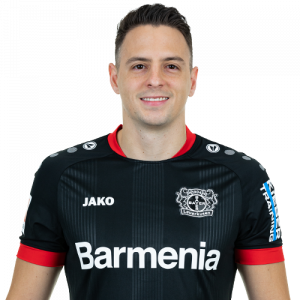 Santiago “Santi” Arias Naranjo (born 13 January 1992) is a Colombian professional footballer who plays as a right back for German club Bayer Leverkusen on loan from Spanish club Atlético Madrid and the Colombia national team.

La Equidad
Arias was a youth product of the La Equidad academy. He was moved into the senior squad during 2009 making his professional debut that same year against Deportes Tolima. He soon became a regular for the Bogotá based club and racked up 28 appearances. His notable performances earned him the opportunity to represent his nation at the 2011 FIFA U-20 World Cup hosted in Colombia. After a successful spell at his club and internationally, he soon moved to Portugal to join the ranks of Lisbon team Sporting CP.

Sporting CP
While representing the U20 national Colombian side in 2011, Arias attracted the scouts of Sporting CP. On 1 July 2011, Arias was ultimately signed by Sporting on a 5-year contract for a transfer free of €300,000. He made his European debut on 6 November replacing Matías Fernández in the 80th minute against U.D. Leiria. Despite making his first team debut, Arias spent most of his playing time with the B-Squad where he scored a goal in 28 appearances. He occasionally made appearances with the first squad, but never broke in for a permanent spot.

PSV
In early 2013, Arias was linked to the Dutch club PSV but nothing was finalized. In July 2013, Arias was once again linked to the club where both parties agreed on finalizing a deal. It was then reported that Arias signed a four-year contract and PSV paid Sporting €1.6 million for a package deal including fellow Sporting teammate Stijn Schaars.

Atlético Madrid
On 31 July 2018, it was announced that Arias completed a transfer to Atlético Madrid for a reported transfer fee of £11 million. Upon his arrival, Arias was handed the number 4 shirt.

He made his unofficial debut in friendly against Cagliari replacing Juanfran at the start of the second half. Atlético went on to win the match with Borja Garcés scoring the sole goal. He made his league debut for the club on 1 September, coming on as a substitute for José Giménez in a 2–0 defeat against Celta de Vigo. On 19 January 2019, he scored his first goal for Los Rojiblancos in a 0–3 defeat of SD Huesca.