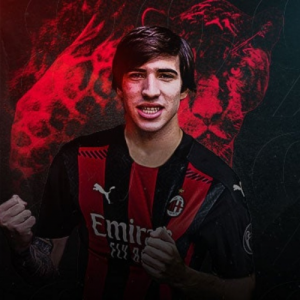 Sandro Tonali (born 8 May 2000) is an Italian professional footballer who plays as a midfielder for Serie A club Milan, on loan from Brescia, and the Italy national football team.

Brescia
2017–2019: Serie B
Tonali made his professional debut for Brescia Calcio on 26 August 2017, aged 17, coming on as a substitute in the Serie B away match lost 2–1 against Avellino. On 28 April 2018 he scored his first professional career goal, in a 4–2 defeat against Salernitana in Serie B. He obtained 19 league appearances in total during his first season as a professional player, scoring two goals and providing two assists during the 2017–18 Serie B season.

The following season, Tonali won the Serie B title with Brescia, and achieved promotion to Serie A, featuring as a starter for the club throughout the entire 2018–19 season.

2019–2020: Serie A
He made his Serie A debut on 25 August 2019, aged 19, in a 1–0 away win against Cagliari. On 29 September, he assisted Mario Balotelli’s goal from a corner kick in a 2–1 away loss to Napoli; he also scored a goal during the match with a powerful shot from outside the area, which was disallowed by VAR, however, for a foul by Brescia’s Dimitri Bisoli on Napoli’s Nikola Maksimović. He scored his first Serie A goal on 26 October, netting a long-range free kick into the top corner from the left flank, which was the opening goal in an eventual 3–1 away defeat to Genoa.

2020–present: Loan to Milan
On 9 September 2020, Tonali joined Milan, on a season-long loan for €10 million with an option to buy for €15 million, plus bonuses worth €10 million. The player will earn a yearly wage of €2 million for five years. Three days later, he made his non-competitive debut in a friendly at Milanello against his former club Brescia.