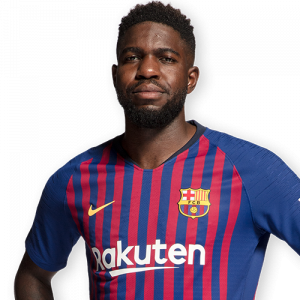 Samuel Yves Um Titi (born 14 November 1993), known as Samuel Umtiti, is a French professional footballer who plays as a centre-back for Spanish club Barcelona and the French national team.

Umtiti began his professional career with Lyon in 2012, winning both the Coupe de France and Trophée des Champions in his first year. He totalled 170 games and three goals before a €25 million transfer to La Liga club Barcelona in 2016. He went on to win the Copa del Rey in his first season in Spain and a double (La Liga and Copa del Rey) the following campaign.

After winning 47 caps and scoring three goals at youth level, including winning the 2013 U-20 World Cup, Umtiti made his senior debut for France at Euro 2016, where they reached the final. Two years later, he was part of the squad that won the 2018 World Cup.

Now established as first-choice in defence at the club, after Barcelona’s subpar 2017 Supercopa de España while reeling off the loss of Neymar, Umtiti began the season with great performances, under the guidance of new manager Ernesto Valverde. On 2 December, Umtiti injured his right hamstring and was ruled out for eight weeks. Umtiti scored the winning goal against Valencia CF at Camp Nou, on 14 April, in a 2–1 victory for the Catalans. A week later, on 21 April, Umtiti started for Barcelona in the 2018 Copa del Rey Final, holding a clean sheet in an eventual 5–0 victory over Sevilla at the Metropolitano Stadium. Additionally, Umtiti won his first La Liga winners’ medal during his second season in Spain, with the defender appearing in 40 games and scoring one goal across all competitions.

On 3 June 2018, Umtiti signed a new five-year contract with Barcelona. The release clause was subsequently set at €500 million. Umtiti was named as a substitute for the 2018 Supercopa de España behind Piqué and a new summer signing Clément Lenglet. Despite not featuring and with Barcelona winning the match 2–1 against Sevilla, Umtiti claimed his fifth winners’ medal since joining the club.

In 2018, Umtiti picked up a knee injury which could have been treated with surgery, but he instead opted for conservative treatment, and proceeded to play in the 2018 World Cup, which he won with France. However, this choice resulted in Umtiti spending much of the following season with Barcelona injured.

In August 2020, while recovering from a knee injury, Umtiti tested positive for COVID-19.