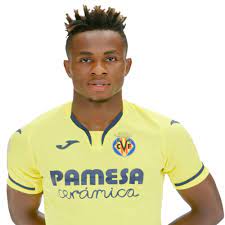 Samuel Chimerenka Chukwueze (born 22 May 1999) is a Nigerian professional footballer who plays for Spanish club Villarreal and the Nigeria national team as a winger.

Born in Amaokwe Ugba Ibeku, Umuahia, Abia State, Chukwueze joined Villarreal CF’s prolific youth setup in 2017, from local side Diamond Football Academy. After being initially assigned to the club’s Juvenil A squad, he made his senior debut with the reserves on 15 April 2018, coming on as a second-half substitute for Sergio Lozano in a 1–1 Segunda División B away draw against CE Sabadell FC.

Chukwueze scored his first senior goal on 20 May 2018, netting his team’s second in a 3–1 away defeat of Bilbao Athletic. He contributed with two goals in 11 appearances during his first season, as his side missed out promotion in the play-offs.

In April 2019, he won the Nigeria Football Federation’s 2018 Young Player of the Year award.