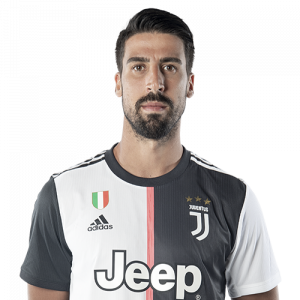 Sami Khedira (born 4 April 1987) is a German professional footballer who plays as a central midfielder for Bundesliga club Hertha BSC and the Germany national team.

He began his career at VfB Stuttgart, winning the Bundesliga in 2007, before moving to Real Madrid in 2010. In his five seasons in Spain, he won seven domestic and international trophies, including the UEFA Champions League in 2014. In 2015, he moved to Italian side Juventus on a free transfer, and won the Serie A title and Coppa Italia in his first three seasons with the club, followed by two more league titles and a Supercoppa Italiana.

VfB Stuttgart
Before joining the youth team of VfB Stuttgart in 1995, he played at TV Oeffingen. In the first months of the 2006–07 season, he was called up into VfB’s Bundesliga squad by manager Armin Veh.

Real Madrid
On 30 July 2010, Khedira moved to Real Madrid for an undisclosed fee, signing a contract until 2015. Khedira made his debut on 13 August in a friendly match against Bayern Munich, which Real Madrid won 4–2 on penalties for the Franz-Beckenbauer-Cup. His league debut came sixteen days later, in a 0–0 away draw against Mallorca. He made 40 appearances across his first season in Spain and won his first club honour on 20 April 2011 as his team won the Copa del Rey final against El Clásico rivals FC Barcelona.

Juventus
On 9 June 2015, Italian side Juventus announced that Khedira had signed a four-year deal on a free transfer. The move was completed on 1 July, at the start of the 2015–16 season.
On 1 August, Khedira was stretchered off the pitch after just 25 minutes while playing in a pre-season friendly match against Marseille with a hamstring injury and was ruled out of the Supercoppa Italiana a week later against Lazio.