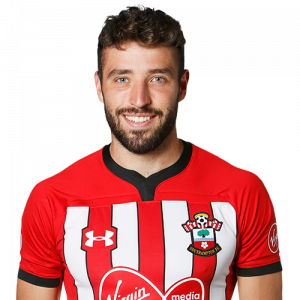 Samuel James McQueen (born 6 February 1995) is an English professional footballer who plays for Southampton. A native of the city of Southampton, McQueen joined the Southampton Academy at the age of eight and has remained with the club ever since. Handed his senior debut for the club in 2014, he plays primarily as a left-sided full back or winger.

Early life
McQueen was born in Southampton and attended The Mountbatten School in Romsey, Hampshire. He was scouted by Southampton when he was eight years old whilst playing for Oakwood Rangers, a local youth side. He was part of the Southampton FC Academy U13 side that were runners up in the prestigious Dr Pepper Dallas Cup Tournament in Texas where they lost 1–0 to FC Barcelona California in 2008. The same team included other academy products James Ward-Prowse, Luke Shaw, Calum Chambers, Harrison Reed, Jordan Turnbull, Jake Sinclair, all who gained professional contracts in later years with the club.

Club career
McQueen was named in the Southampton senior team for the first time on 15 February 2014 for the FA Cup fifth round match against Sunderland at the Stadium of Light; he came on in the second half for his debut, playing the last eight minutes of the 0–1 defeat, in place of Adam Lallana. McQueen signed a new four-year contract on 17 June 2014.

In January 2016, McQueen completed a loan move to League One side Southend United until the end of the season. He made his league debut in the 3–0 home win over Coventry City, coming on as a substitute in the 86th minute. He scored his first league goal as a professional 11 days later in his first full league start in the Essex derby against Colchester United on his 21st birthday.

He made his Premier League debut for Southampton on 16 October 2016, when he replaced Matt Targett at left-back after 14 minutes of a 3–1 win over Burnley, winning a penalty for the third goal. Four days later, he made his 2016–17 UEFA Europa League debut and first senior start for the Saints on 20 October versus Inter Milan at the San Siro. This was followed three days later by his first league start for them in a 1–1 away draw with Manchester City.

On 5 December 2016, McQueen signed a new long-term contract with Southampton, penning a deal until 2021.

On 30 August 2018, McQueen signed for Middlesbrough on a season-long loan.  In October he suffered a serious knee injury in a game against Crystal Palace; a further infection of his knee reconstruction would cause McQueen to be out of football for over two years.