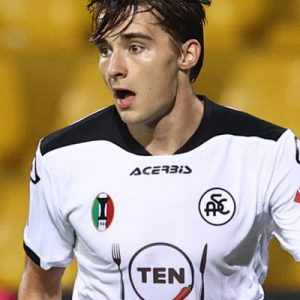 Born in Sant Joan Samora, Barcelona, Catalonia,[1] Ferrer represented RCD Espanyol, UFB Jàbac Terrassa, CF Martorell – where he made his senior debut in Tercera Catalana – and CF Damm as a youth. On 10 July 2017, he signed a two-year contract with Gimnàstic de Tarragona, being assigned to the farm team in Tercera División.

Ferrer made his debut for Pobla on 17 September 2017, coming on as a second-half substitute for Pol Valentín in a 1–0 home win against FC Vilafranca. He scored his first goal the following 22 April, netting the game’s only in an away defeat of FC Santboià.

Ferrer made his professional debut on 7 October 2018, replacing Roger Figueras in a 1–1 away draw against Cádiz CF for the Segunda División championship. The following 21 January, after establishing himself as a starter under Enrique Martín, he renewed his contract until 2021.

On 9 August 2019, Ferrer was transferred to Italian Serie B side Spezia Calcio, and signed a four-year deal with the club.