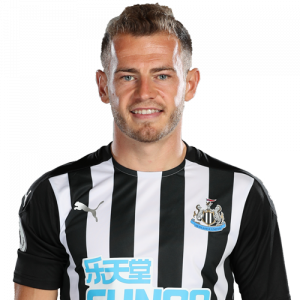 Ryan Fraser (born 24 February 1994) is a Scottish professional footballer who plays as a winger for Premier League club Newcastle United and the Scotland national team. He has previously played for Aberdeen, Bournemouth and Ipswich Town. He represented the Scotland under-19 and under-21 team, and made his full international debut in June 2017.

On 7 September 2020, free agent Fraser joined Newcastle United on a five-year contract. He made his debut for the club on 15 September 2020, scoring the winner in a 1–0 victory over Blackburn Rovers in the EFL Cup.

Fraser was first called up to the senior Scotland squad in March 2017. He made his international debut in June 2017, appearing as a substitute in a 2–2 draw with England.

Primarily deployed as a winger on the left flank, Fraser is a right-footed player described by his compatriot Charlie Nicholas as an “old-fashioned type of player” and a “little pocket dynamo” for the muscular physique he has developed to “take the knocks and kicks that come his way.” Fraser has also occasionally played in the right-back position for both club and country.