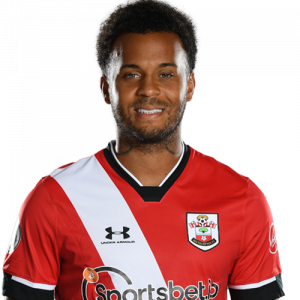 Ryan Dominic Bertrand (born 5 August 1989) is an English professional footballer who plays as a left back for Premier League club Southampton and the England national team.

Born in Southwark, London, Bertrand began his youth career at Gillingham, before signing for Chelsea in July 2005. He graduated from Chelsea’s youth system and was sent on loan to various clubs between 2006 and 2010. He made his full debut for Chelsea on 20 April 2011, six years after joining them, in a fixture against Birmingham City. In the 2011–12 season, Bertrand signed a new four-year contract with Chelsea and was made understudy to Ashley Cole, whom he described a “fantastic role model.” On 19 May 2012, Bertrand became the first player to make his Champions League debut in the final, starting in an unfamiliar left wing role in front of Cole; Chelsea beat Bayern Munich 4–3 on penalties. He has honours with Chelsea, including an FA Cup, UEFA Europa League and UEFA Champions League titles.

Bertrand is an England international, having also represented ‘the Young Lions’ at under-17, under-18, under-19, under-20, under-21 levels, as well as Great Britain at the 2012 Summer Olympics. On 15 August 2012, he made his debut for the England senior team, in a friendly against Italy, in a 2–1 win.

On 30 July 2014, Bertrand joined Southampton on loan for the 2014–15 season. He made his competitive debut for the club on 17 August in their first match of the league season, playing the full 90 minutes of a 2–1 defeat away to Liverpool. Bertrand scored for Southampton the first time on 27 September, opening a 2–1 home win against Queens Park Rangers. His second goal for the club came on 26 December, in a 3–1 victory over Crystal Palace. On 1 February 2015, he was given a straight red card at the end of a 0–1 home loss against Swansea City for a foul on Modou Barrow.

On 2 February 2015, Bertrand completed a permanent move to Southampton, signing a 4½-year deal for an undisclosed fee, reported to be £10 million. On 26 April, he was the only Southampton player named in the PFA Team of the Year.

Bertrand scored his only goal of the 2015–16 season in the final match, a penalty in a 4–1 win over Crystal Palace. On 12 July 2016, Bertrand signed a new five-year contract.