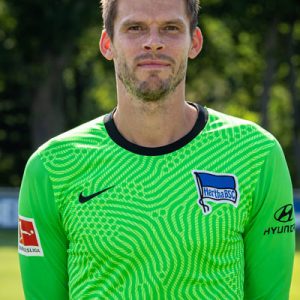 Rune Almenning Jarstein (born 29 September 1984) is a Norwegian professional footballer who plays as a goalkeeper for Bundesliga club Hertha BSC and the Norwegian national team.

Early career
Jarstein was born in Porsgrunn. He started his career playing for local team Herkules in Skien. During his teens, he had trials at several European top clubs, including Manchester United and Bayern Munich.

Jarstein made his debut in the Norwegian top division, aged 18, playing for Odd in 2002. In 2007, after Odd Grenland had been relegated to the Norwegian First Division, he was transferred to Rosenborg.

On 8 March 2010, Jarstein signed for Viking, after losing his starting position to Daniel Örlund. His contract with Viking expired after the 2013 season.

Hertha BSC
On 17 December 2013, he signed a two-year contract for German club Hertha BSC. Throughout the 2015–16 season, he was the first-choice goalkeeper as Thomas Kraft was injured after sustaining a shoulder injury. This gave second-choice goalkeeper Jarstein the chance to show his ability, and he took the ‘keeper spot for the rest of the season. On 18 December 2015, after his successful spell, he was rewarded with a contract extension of three and a half years at Hertha to the end of the 2018–19 season.

Jarstein remained Hertha’s first choice goalkeeper over Kraft. Only during the UEFA Europa League qualification round, did Kraft and Jarstein switch positions, with Jarstein in goal for the home leg and Kraft in goal for the away leg. In an away match against Borussia Dortmund, Jarstein’s performance was met with high praise after several outstanding saves and after saving a penalty from Dortmund striker Pierre-Emerick Aubameyang, earning Hertha a point with a 1–1 draw.

On 12 April 2018, Jarstein signed a new deal keeping him at the club beyond 2019 when his current contract was about to expire.