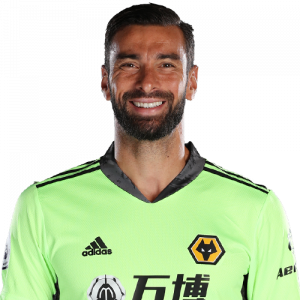 Before moving to England, he spent most of his career with Sporting CP, making his first team debut at the age of 18 and going on to appear in 467 official games. He won five trophies during his 12-years with the club, including two Portuguese Cups.

Patrício earned his first cap for Portugal in 2010, after Paulo Bento’s appointment as head coach. He represented the nation in two World Cups and three European Championships, winning the 2016 edition of the latter tournament as well as the 2019 Nations League.

On 1 June 2018, Patrício submitted a request to terminate his Sporting contract with grounds for just cause, due to the dressing room violence from supporters as well as seeing an €18 million move to newly promoted Premier League team Wolverhampton Wanderers fall through, after Sporting president Bruno de Carvalho pulled out of negotiations at the last minute. He completed the move on 18 June, on a four-year deal, and it was announced on 31 October that both clubs had agreed a €18 million deal as settlement of his departure to England.

Patrício opted to wear the No.11 shirt for Wolves as opposed to the habitual No.1, in honour of Carl Ikeme, who had just retired following treatment for acute leukaemia. He made his league debut on 11 August 2018, in a 2–2 home draw against Everton. He kept nine clean sheets – a club record – as they finished his first season in seventh place and qualified for the Europa League.

In 2019–20, Patrício increased his number of shutouts to 13, and conceded 40 goals compared to 46 the season before. On the European front, he helped the team to a first continental quarter-final since 1972.