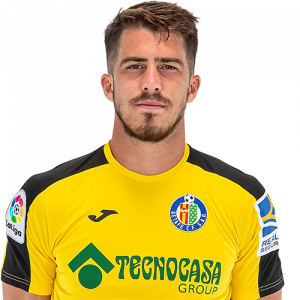 Orlando Rubén Yáñez Alabart (born 12 October 1993), known as Rubén Yáñez, is a Spanish professional footballer who plays for Getafe CF as a goalkeeper.

Real Madrid
Born in Blanes, Girona, Catalonia, Yáñez joined Real Madrid’s youth academy from local side Girona FC in 2010, aged 17. He made his senior debut in the 2012–13 season, playing 26 games for the C-team in Segunda División B. In July 2013, Yáñez was promoted to the reserves, in Segunda División.

On 8 September 2013, Yáñez made his professional debut, starting in a 0–1 home loss against CD Mirandés. Mainly a backup to Fernando Pacheco during the campaign, he appeared in four matches as his side suffered relegation.

After Pacheco’s promotion to the main squad, Yáñez was an undisputed starter for the reserves in 2014–15, contributing with 30 appearances. On 5 August 2015 he was promoted to the first team by new manager Rafael Benítez, and made his debut four days later, coming on as a late substitute for Kiko Casilla in a 0–0 friendly draw against Vålerenga Fotball.

Getafe
On 17 August 2017, Yáñez signed a four-year deal with Getafe CF, being immediately loaned to Cádiz CF for one year. He made only six appearances during his time in Andalusia, all in the Copa del Rey.

On 22 August 2019, after spending the whole 2018–19 season as a third-choice, Yáñez joined SD Huesca on a one-year loan deal. He contributed with eight appearances overall for the side, acting as a backup to Álvaro Fernández as his side achieved promotion to the top tier as champions.

Yáñez finally made his debut for Getafe on 17 December 2020 in a 2–1 win at CD Anaitasuna in the first round of the cup. Three days later he made his La Liga bow in a 2–0 win at former club Cádiz, to finally play in the top flight at the age of 26.