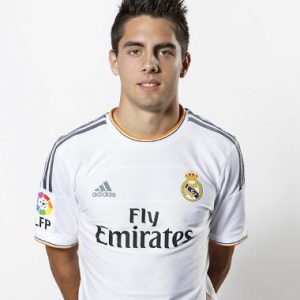 Rubén Sobrino Pozuelo (born 1 June 1992) is a Spanish professional footballer who plays as a forward for La Liga club Cádiz, on loan from Valencia.

In July 2008, 16-year-old Sobrino joined Real Madrid’s Juvenil B team. In 2011–12, he made his senior debut as a 77th-minute substitute for Fran Sol in Real Madrid C’s match against Rayo Majadahonda. In 2012–13, he played his first Segunda División B match, starting against Caudal Deportivo.

On 26 May 2013, Sobrino made his first appearance with Real Madrid Castilla, coming on as a substitute for Jesé in an eventual 1–1 draw at Elche. After Castilla’s relegation, he moved to Ponferradina on 7 August 2014.

On 28 August 2015, Sobrino was transferred to Manchester City for a €250,000 fee plus 200,000 on variables. He was immediately sent on loan to Girona in a season-long deal. On 14 July 2016, he was loaned to La Liga club Alavés for one year with an option to an extension for an additional year.

Sobrino made his debut in the main category of the Spanish football on 16 October 2016, replacing Aleksandar Katai in a 1–1 home draw against Málaga. His first goal in the competition came the following 5 February, as he netted the first in a 4–2 away win against Sporting de Gijón.

On 6 July 2017, Manchester City announced Sobrino would join Alavés on a permanent four-year contract after playing with the club on loan the previous season. On 31 January 2019, he moved to fellow first division side Valencia CF on a three-and-a-half-year deal. On 31 January 2021, he joined Cádiz on loan for the remainder of the season.