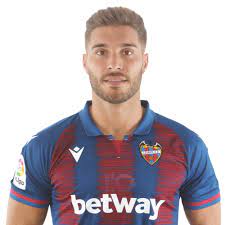 Rubén Rochina Naixes (born 23 March 1991) is a Spanish professional footballer who plays for Levante UD as a winger or a forward.

Rochina began his professional career with Barcelona B before joining Blackburn Rovers in 2011, spending three years with the club that included two loan spells, at Zaragoza and Rayo Vallecano.

Barcelona
Born in Sagunto, Valencian Community, Rochina arrived at FC Barcelona’s youth system at the age of 13, after starting his development with local Valencia CF.

Blackburn Rovers
On 31 January 2011, without having appeared for Barcelona’s first team, Rochina joined Premier League team Blackburn Rovers on a four-year deal. On 11 February, he scored twice for the reserves against Newcastle United’s reserves in a 4–4 draw.

Granada
On 3 August 2014, Rochina signed a four-year deal with Granada CF for an undisclosed fee. He scored two goals in his first year, the second being a 50-meter lob in a 3–0 away win over Real Sociedad.

Rubin Kazan
On 20 July 2016, Rochina moved abroad for a second time when Russian Premier League side FC Rubin Kazan triggered his €10 million release clause and offered to treble his wages – Blackburn were due 15% of the receipt. He returned to his homeland on 31 January 2018, joining Levante UD on loan until the end of the season.

Levante
Following his loan, Rochina signed a three-year contract with Levante on 4 July 2018.