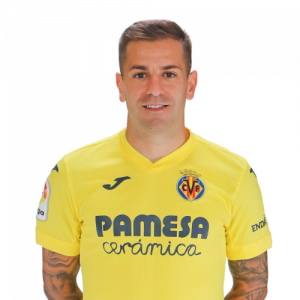 Rubén Peña Jiménez (born 18 July 1991) is a Spanish professional footballer who plays for Villarreal as either a right-back or right winger.

Born in Ávila, Castile and León, Peña made his senior debut with local Real Ávila CF in Tercera División. In the summer of 2012 he signed for Real Valladolid, being initially assigned to the reserves in the same level.

Peña appeared in his first official game with the first team on 1 November 2012, playing the full 90 minutes in a 1–0 home win against Real Betis in the round of 32 of the Copa del Rey (1–3 aggregate loss). He made his La Liga debut ten days later, coming on as a late substitute in a 1–1 home draw with Valencia CF.

On 13 August 2013, Peña joined CD Guijuelo of Segunda División B. On 10 July of the following year he moved to CD Leganés, newly promoted to the second tier.

On 16 June 2016, after being an important figure in Lega’s first-ever promotion to the top flight, Peña signed a three-year deal with fellow league club SD Eibar. He finished his first season with 28 appearances and one goal, helping to a tenth-place finish.

Peña was converted into a right back by manager José Luis Mendilibar during 2017–18. He became a regular starter in that position the following campaign, after the departure of Ander Capa.

On 4 July 2019, Peña joined Villarreal CF on a five-year contract. He made his competitive debut on 17 August, starting and scoring an own goal in a 4–4 home draw against Granada CF.