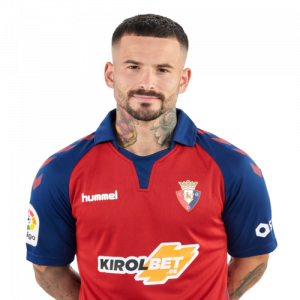 Rubén García Santos (born 14 July 1993) is a Spanish professional footballer who plays for CA Osasuna as a left winger.

Levante
Born in Valencia, Valencian Community, García graduated from local Levante UD’s youth system, making his senior debut with the reserves in Tercera División. In 2011, he was linked with a move back to Valencia CF, but a deal could not be reached; on 31 January of the following year, he signed a professional contract running until 2016.

On 2 September 2012, García made his first La Liga appearance, coming on as a substitute for Nabil El Zhar in a 3–2 home win over RCD Espanyol. On 21 October, in the same competition, he provided an assist to Míchel for the game’s only goal against Getafe CF.

García scored his first top-tier goal on 9 December 2012, in a 4–0 home defeat of RCD Mallorca. In January of the following year he was permanently promoted to the first team, being assigned the number 11.

On 28 July 2017, after contributing 17 scoreless appearances to a promotion to the top flight, García was loaned to Segunda División club Sporting de Gijón for one year.

Osasuna
On 20 August 2018, García agreed to a three-year deal at fellow league side CA Osasuna on a free transfer – Levante also retained 50% of the player’s federative rights. The following 21 June, after helping them achieve top-division promotion as champions, he was bought outright and extended his contract at the El Sadar Stadium until 2023.