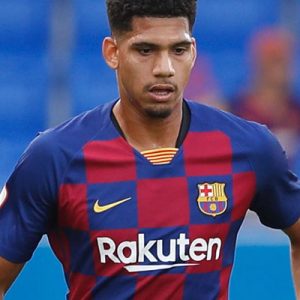 Ronald Federico Araújo da Silva (born 7 March 1999) is a Uruguayan professional footballer who plays as a centre-back for Spanish club Barcelona and the Uruguay national team.

Rentistas
Born in Rivera to a Brazilian mother, Araujo joined Rentistas from hometown club Huracán de Rivera. He made his senior debut with the former on 24 September 2016, coming on as a late substitute in a 1–0 Segunda División away win against Tacuarembó.

Araújo scored his first senior goal on December 9, 2016, netting the equalizer in a 2–2 home draw against Central Español. He became a regular starter during the 2017 season, and scored a hat-trick in a 3–2 away win over Villa Española on 17 June of that year.

Boston River
On 28 July 2017, Araújo joined Primera División side Boston River. He made his debut in the category on 18 September, replacing Maximiliano Sigales late into a 1–0 home success over El Tanque Sisley.

Barcelona
On 29 August 2018, Araújo signed a five-year contract with FC Barcelona for a fee of €1.7 million, plus €3.5 million in variables; he was initially assigned to the reserves in Segunda División B. He made his first team – and La Liga – debut on 6 October of the following year, coming off the bench to replace Jean-Clair Todibo in the 73rd minute of a 4–0 home win against Sevilla; however, he was sent off in the 86th minute for tackling Javier Hernández.

For the 2020–21 season, Araújo was promoted to the main squad, being handed the number 4 jersey, which was previously worn by Ivan Rakitić. On 19 December 2020, he scored his first La Liga goal for Barcelona in a 2–2 home draw against Valencia.