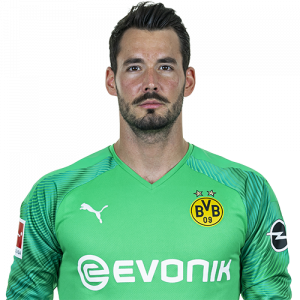 Roman Bürki (born 14 November 1990) is a Swiss professional footballer who plays as a goalkeeper for Bundesliga club Borussia Dortmund.

Club career
Switzerland
Bürki began his career in 2007 with the reserve squad of the BSC Young Boys. In 2009, he moved to FC Thun, and half a year later to FC Schaffhausen. In the summer of 2010 he went back to BSC Young Boys, and again half a year later he was transferred to Grasshopper Club Zürich. First, he was the back-up goalkeeper, later the first goalkeeper. He was on loan until 2013, when Grasshoppers bought his rights.

For 2014–15 Bundesliga season he succeeded Oliver Baumann as number one goalkeeper. He played in all 34 games, while being unable to prevent the team from being relegated to 2. Bundesliga.

In the 2017–18 season, Bürki became the first goalkeeper to keep five clean sheets in the first five Bundesliga games.