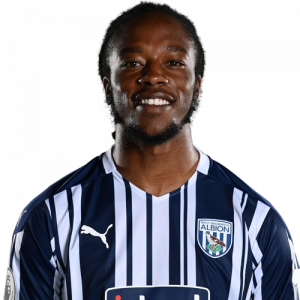 Romaine Theodore Sawyers (born 2 November 1991) is a professional footballer who plays as a midfielder for Premier League club West Bromwich Albion and the Saint Kitts and Nevis national team.

A West Bromwich Albion academy graduate, he had brief spells on loan at Port Vale, Shrewsbury Town and Walsall. He signed with Walsall in July 2013, following his release from West Brom. He played on the losing side in the 2015 final of the Football League Trophy. He was named in League One’s PFA Team of the Year for his performances in the 2015–16 season. He joined Brentford in July 2016 and went on to serve as club captain before he returned to West Bromwich Albion for an undisclosed fee in July 2019. He helped the club to win promotion out of the Championship at the end of the 2019–20 season and was also named in the PFA Team of the Year.

On 27 July 2019, Sawyers returned to West Bromwich Albion, signing a three-year contract after being bought for an undisclosed fee (reported to be £2.9 million); Sawyers stated that “this is the team that I have always wanted to play for”. Manager Slaven Bilić said that “we targeted him as a player who will raise the quality in our midfield”. He chose to wear the #19 shirt in homage to former midfielder Jason Koumas. On 22 February 2020, he was sent off after putting his hand to the throat of former Walsall teammate Jamie Paterson during a 3–0 win at Bristol City. During break in play due to the COVID-19 pandemic in England, FourFourTwo magazine listed Sawyers as the ninth best player in the EFL. He ended the 2019–20 season with one goal in 43 appearances as the “Baggies” secured the Championship’s second automatic promotion place. He was also named in the Championship’s PFA Team of the Year.

On 29 December 2020, he scored what The Guardian’s Paul Doyle described as a “slapstick own goal” in a 5–0 defeat to Leeds United at The Hawthorns. Sawyers took to Twitter to say that “I take full responsibility for setting the tone for what went on to be a difficult night for us all to stomach!” In January 2021, a 49-year-old man from Kingswinford was arrested after a racist message was sent to Sawyers on social media during the club’s loss to Manchester City.