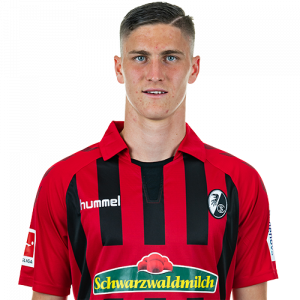 Roland Sallai (born 22 May 1997) is a Hungarian professional footballer who plays for German club SC Freiburg and the Hungary national team.

Sallai started his professional career at Puskás Akadémia where he played from 2014 until the summer of 2017. He made his debut on 1 August 2014 against Pécs, and scored first goal in Hungarian league against Ferencváros on 14 September 2014 in Groupama Aréna.

On 4 August 2016, Sallai joined Italian club Palermo on a seasonal loan, until the end of the 2016–17 season with a loan fee of €300,000. Sallai completed 84 minutes on his debut for Serie A’s club on 10 September 2016 against Napoli. He scored his first official goal for Palermo on 19 March 2017 against Udinese. He appeared in 21 Serie A matches (eleven in the starting line-up, ten as a substitute) and scored one goal.

On 29 August 2017, it was announced that APOEL had secured his signature on a four year contract until the end of May 2021, for an undisclosed transfer fee from Puskás, rumored to be around €2 million. On 9 September, he made his debut and scored his first goal against Nea Salamina. He appeared in 29 Cypriot First Division matches and scored 9 goals.

On 31 August 2018, Sallai signed a four-year deal with Bundesliga club, SC Freiburg for a fee reported to be €4.5 million. On 22 September 2018 he scored and won a penalty on his debut against Wolfsburg at Volkswagen Arena on the 4th match day of the 2018–19 Bundesliga in a 3–1 victory, and he was named in the team of the week following his performance. From middle of November 2018 he had an adductor problems, and was unable to play for the next 5 months. He returned as a supstitute on 5 May 2019 against Fortuna Düsseldorf.

Sallai started his third season at the Freiburg with a goal and a assist against VfB Stuttgart in a 3–2 victory. He scored two goals against Schalke 04 in 2–0 victory in Veltins-Arena and was named in the team of the 12th match day by sports magazine kicker.