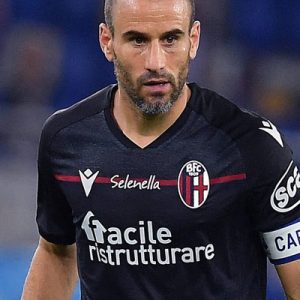 Rodrigo Sebastián Palacio Alcalde (born 5 February 1982) is an Argentine professional footballer who plays as a forward for Italian club Bologna.

He is the son of José Ramón Palacio, a historic player of Club Olimpo during the 1980s. Palacio holds a Spanish passport, allowing him to be counted as an EU player. At international level, Palacio has represented the Argentina national team at two FIFA World Cups and a Copa América, winning runner-up medals at the 2014 World Cup and the 2007 Copa América.

Beyond his qualities as a footballer, Palacio is also known for his strange rattail braid hairstyle.

On 17 August 2017, Palacio signed a one-year contract with Bologna.

He made his debut in a 1–1 draw vs Torino on 20 August, coming on as a substitute in the 82nd minute for Simone Verdi. He made his first full start on 10 September in a 0–3 loss against Napoli, being substituted off in the 77th minute for Bruno Petković. A week later, he scored his first goal for the club in a 1–2 loss against Fiorentina at the Stadio Renato Dall’Ara, this was also the first time he played the full 90 minutes since his arrival in the summer.