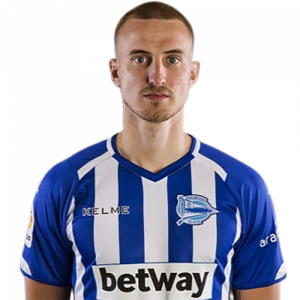 Rodrigo Ely (born 3 November 1993) is a Brazilian professional footballer who plays for Spanish club Deportivo Alavés as a central defender.

Milan
Rodrigo Ely is a youth product of Brazilian club, Grêmio, and joined Milan in 2010. He spent two years with the youth side before subsequent loan spells with several low tier Italian clubs.

Reggina / Varese (loan)
On 24 July 2012, Ely joined Reggina on a season-long loan. On 16 July 2013, AC Milan confirmed that they had reached an agreement for the season-long loan of Ely to Varese.

Avellino
On 21 July 2014, Ely joined Avellino on a free transfer.

Return to Milan
After impressive performances with Avellino in the 2014–15 season, Milan decided to bring him back to San Siro on 10 June 2015, where he signed new contract which will keep him at the club until 30 June 2019. Despite Ely being a free agent, Milan also paid an unknown party a €8 million fee.

He made his first Serie A game of the 2015–16 season with Milan, in a 2–0 defeat against Fiorentina, where he received two yellow cards, thus getting sent off.

Alavés
On 30 January 2017, Ely joined La Liga club Deportivo Alavés on loan for the remainder of the season. He made his debut for the club on 11 March, replacing Ibai Gómez in a 2–1 away win against Málaga CF.

On 17 April 2017, Ely scored his first goal in the main category, netting his team’s second in a 2–1 home win against Villarreal CF. On 21 July, he signed a permanent four-year deal with the Basque side.