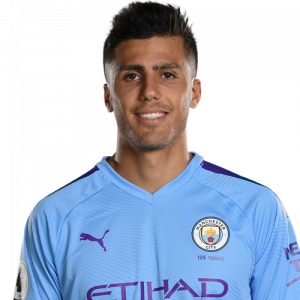 Rodrigo Hernández Cascante (born 22 June 1996), known as Rodri, is a Spanish professional footballer who plays as a defensive midfielder for Premier League club Manchester City and the Spain national team. He is a former Spain youth international, and made his debut for the senior national team in 2018.

On 3 July 2019, Manchester City met the terms of Rodri’s £62.6 million release clause, enabling him to buy out the remainder of his contract with Atlético and leave the club. The transfer was a new record transfer fee paid by Manchester City. He signed a five-year contract.

Rodri made his debut in the 2019 FA Community Shield on 4 August at Wembley Stadium, playing the full 90 minutes as City won on penalties against Liverpool after a 1–1 draw. He made his Premier League debut against West Ham United six days later in a 5–0 away win, and on 14 September he scored his first goal as consolation in a 3–2 away defeat by Norwich City.

It was announced in October 2019 that he would be out for a month due to a hamstring injury.

On 1 March 2020, City won the EFL Cup at Wembley Stadium for the third time in a row, beating Aston Villa 2–1 in the final. Rodri headed in City’s second goal from a corner, which ultimately turned out to be the winner.