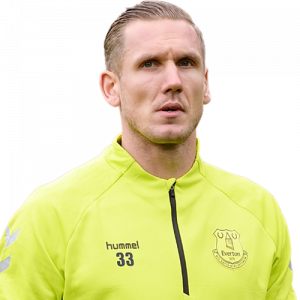 Robin Patrick Olsen (Swedish pronunciation (born 8 January 1990) is a Swedish professional footballer of Danish descent who plays as a goalkeeper for Premier League club Everton, on loan from Roma, and the Sweden national team.

Olsen’s parents are Danish and he used to hold a Danish passport, but grew up in Sweden. He began his career playing for Malmö youth teams before moving to the academy of BK Olympic. At the age of 16 he joined IF Limhamn Bunkeflo and made his debut in the Swedish second tier of a year later.

Following a knee injury he went on to play for Bunkeflo FF and IFK Klagshamn.

He played his first game for Everton on 1 November, away from home in the league against Newcastle United, replacing Jordan Pickford who had played 120 consecutive league games prior. Everton went on to lose the game 2–1.

Olsen played his second game for Everton on 16 December 2020, away from home in the league against Leicester City. Everton won the game 0–2 with Olsen keeping a clean sheet.