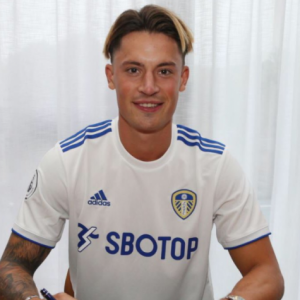 Robin Koch is a German professional footballer who plays as a defender for Premier League club Leeds United and the German national team.

Early career
Having played youth football with 1. FC Kaiserslautern, SV Dörbach and Eintracht Trier, Koch started his senior career at Eintracht Trier, where he made his debut on 22 September 2014 in a 0–0 draw with TuS Koblenz. He scored his first senior goal on 22 November 2014 in a 4–2 victory over SpVgg Neckarelz; A low shot in the 25th minute to put Eintracht Trier 1–0 up. He appeared in 23 league matches for Eintracht Trier across the 2014–15 season, scoring two goals, whilst he also appeared 6 times for their reserve side.

Koch signed his first professional contract with the club in September 2016, with the contract lasting until the summer of 2019. His debut for Kaiserslautern came on 2 October 2016, starting in a 0–0 draw against Arminia Bielefeld.

He made 27 2. Bundesliga appearances in total for his hometown club, whilst he appeared 27 times for the reserve side of 1. FC Kaiserslautern, scoring once.

SC Freiburg
On 22 August 2017, Koch moved to Bundesliga side SC Freiburg. The transfer fee paid to Kaiserslautern was reported as €3.5 million. He made his Bundesliga debut for Freiburg on 22 October 2017 against Hertha Berlin in a 1–1 draw. He scored his first goal for the club on the 13 January 2018 in a 1–1 draw against Eintracht Frankfurt.

Leeds United
On 29 August 2020, Koch joined Leeds United on a four-year deal, for a transfer fee that was reported to be £13 million. Koch made his Premier League debut for Leeds in the first match of the season against Liverpool on 12 September 2020, starting in the 3–4 defeat at Anfield to the reigning champions. Koch was described as having a ‘rough debut’, having given away the penalty resulting in Liverpool’s first goal despite the fact that the ball deflected off his thigh, before failing to mark Virgil van Dijk for Liverpool’s second. Koch was substituted in the ninth minute of a 3–1 defeat to Chelsea on 5 December after a recurrence of a knee injury suffered in the opening game of the season, and subsequently underwent knee surgery.