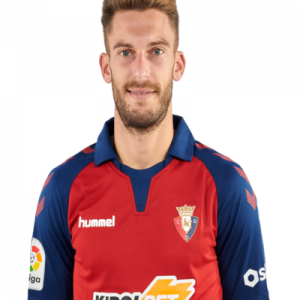 Roberto Torres Morales (born 7 March 1989) is a Spanish professional footballer who plays for CA Osasuna as a midfielder.

Born in Pamplona, Navarre, Torres began his career with hometown club CA Osasuna. He spent five full seasons with the B side in the third division, scoring a career-best 16 goals in 35 games in 2011–12 while being deployed mainly as an attacking midfielder.

Torres made his first-team and La Liga debut on 11 December 2011, coming off the bench for Lolo for the last 20 minutes of a 1–1 away draw against Málaga CF. On 9 August of the following year, he was definitely promoted to the main squad.

Despite appearing sparingly during 2012–13, Torres was handed his first start on 1 June 2013, and netted his team’s first in a 2–4 loss at Real Madrid. In the following campaign he featured more regularly and scored five times, but suffered relegation.

On 22 July 2015, Torres signed a new three-year deal with the Rojillos until 2018. He scored a team-best 12 goals during the 2018–19 season for the Segunda División champions and, consequently, agreed to an extension until 2021 with his buyout clause being set at €10 million.