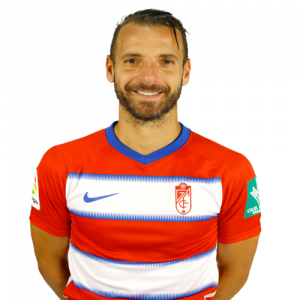 Roberto Soldado Rillo (born 27 May 1985) is a Spanish professional footballer who plays for Granada CF as a striker.

After emerging through Real Madrid’s youth system, he went on to appear in only 27 official matches for the first team (four goals). However, he became a more regular La Liga player and goalscorer for Osasuna, Getafe, and Valencia, and secured a £26 million move to Tottenham Hotspur. After two unsuccessful seasons in England, he returned to the Spanish top division with Villarreal.

An international since 2007, Soldado represented Spain at the 2013 Confederations Cup.

Granada
On 15 July 2019, Soldado signed a one-year contract with recently promoted Granada CF, making him Diego Martínez’s fourth signing of the summer transfer window. He made his competitive debut on 17 August, starting and scoring in a 4–4 draw against Villarreal, and remained a starter as the side qualified for Europe for the first time after a seventh-place finish. In April 2020, the club activated prematurely the contract clause that would keep him for another season.

On 17 September 2020, Soldado scored the first goal in the Andalusians’ European history, in a 4–0 win at Albania’s KF Teuta Durrës in the second qualifying round. He netted twice more in their run to the quarter-finals, one in each leg of a 3–2 aggregate victory over Norwegians Molde FK in the last 16.