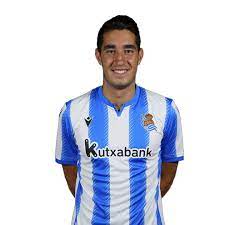 Roberto López Alcaide (born 24 April 2000) is a Spanish professional footballer who plays for Real Sociedad as an attacking midfielder.

Born in Zaragoza, Aragon, López joined Real Sociedad’s youth setup in 2015, from UD Amistad. During the 2017–18 season, while still a youth, he made his senior debut with the C-team in Tercera División.

On 20 June 2018, López renewed his contract until 2022 and was promoted to the reserves in Segunda División B. On 7 December, after already being a regular starter for the B-side, he further extended his deal until 2025.

López made his professional – and La Liga – debut on 14 January 2019, coming on as a second-half substitute for Luca Sangalli in a 3–2 home win against RCD Espanyol. Definitely promoted to the main squad for 2020–21, he scored his first goal in the top tier on 13 September 2020 by netting the equalizer in a 1–1 away draw against Real Valladolid.