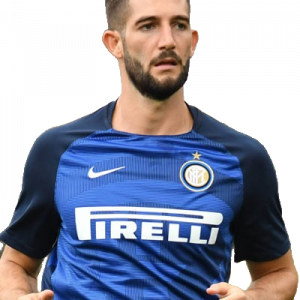 Roberto Gagliardini (born 7 April 1994) is an Italian footballer who plays as a midfielder for Serie A club Inter Milan and the Italy national team.

On 11 January 2017, Gagliardini joined Inter Milan on loan, with an obligation to buy in the summer of 2018. He was presented two days later, where he was assigned the squad number 5 (previously worn by Felipe Melo, who left Inter in the same transfer window). Gagliardini made his Inter debut on 14 January against Chievo at San Siro, playing the full-90 minutes in a 3–1 win to help the Nerazzurri claim their fifth consecutive league victory. On 5 March, he scored his first goal for Inter in a 5–1 win at Cagliari. The following week, Gagliardini scored against his parent club Atalanta in a 7–1 thrashing by Inter.