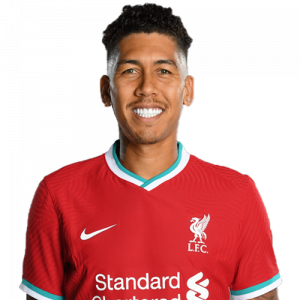 Roberto Firmino Barbosa de Oliveira (born 2 October 1991) is a Brazilian professional footballer who plays as a forward or attacking midfielder for Premier League club Liverpool and the Brazil national team.

After starting his career with Figueirense in 2009, he spent four-and-a-half seasons at Hoffenheim. His 16 goals in 33 games for the 2013–14 Bundesliga season earned him the award for the league’s Breakthrough Player. In July 2015, he signed for Premier League club Liverpool. His creativity, goalscoring and work rate have earned him plaudits at Liverpool, with manager Jürgen Klopp referring to Firmino as the “engine” that propels the club’s counter-attacking system.[5] In the 2018–19 season he won the UEFA Champions League, and the following season won the UEFA Super Cup, the FIFA Club World Cup after scoring the winner in the final, and the 2019–20 Premier League title, Liverpool’s first league title in 30 years.

Firmino made his international debut for Brazil in November 2014. He represented the nation at the 2015 Copa América, the 2018 FIFA World Cup and was part of the Brazil team that won the 2019 Copa América.