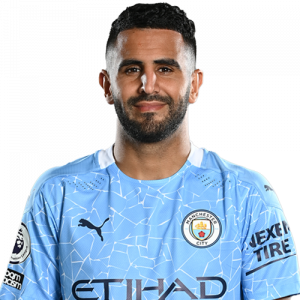 Riyad Karim Mahrez (born 21 February 1991) is a professional footballer who plays as a winger for Premier League club Manchester City and captains the Algerian national team.

Mahrez began his career as a youth player for French club AAS Sarcelles. He turned professional in 2009 with Quimper, where he played for only one season before moving to Le Havre, spending a total of three years with them, initially playing for their reserve team and then becoming a first-team regular. In January 2014, Mahrez signed for English side Leicester City, helping them win the Championship and promotion to the Premier League at the end of his first season. In the 2015–16 season he was the Algerian Footballer of the Year, the PFA Players’ Player of the Year, and was a member of the Premier League PFA Team of the Year as he helped Leicester City win the Premier League. He signed for Manchester City in 2018, winning the Premier League, FA Cup and EFL Cup in his first season.

On 10 July 2018, Manchester City confirmed the signing of Mahrez on a five-year contract. The transfer fee of £60m made Mahrez the most expensive African footballer, and also Manchester City’s most expensive signing and a record transfer fee received by Leicester City. He stated he wanted to win the Champions League with the club. He made his debut as a starter on 5 August, as City defeated Chelsea 2–0 to win the 2018 FA Community Shield at Wembley Stadium. On 22 September 2018, coming on as a substitute in the 61st minute Mahrez scored a brace for Citizens against Cardiff City, The first goal was his first with Manchester City.