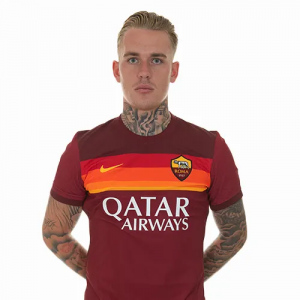 Rick Karsdorp (born 11 February 1995) is a Dutch professional footballer who plays as a right-back for Serie A side Roma and the Netherlands national team.

On 28 June 2017, Karsdorp signed with A.S. Roma on a five-year deal for a fee of €14 million with various performance-related clauses worth up to €5 million in additional payments. With the transfer, he became Feyenoord’s most expensive outgoing player in history.

However, Karsdorp suffered a knee injury that saw him sidelined at the start of the 2017–18 season. After returning to the substitute bench in October, he made his Roma debut, starting a match and played 82 minutes before being substituted, in a 1–0 win against Crotone on 25 October 2017. But his return was short–lived when Karsdorp suffered a knee injury during the match against Crotone and was sidelined for the 2017–18 season. This turns out to be his only appearance for the club.

Ahead of the 2018–19 season, Karsdorp switched number shirt from twenty–six to two. He then returned to the first team and didn’t make his first appearance of the season until on 31 August 2018, starting a match and played 77 minutes before being substituted, in a 2–1 loss against A.C. Milan. But Karsdorp found himself behind the pecking order in the first team, resulting in him being placed on the substitute bench, as well as, his own injury concern. He then started in the next five matches, playing in the right–back position between 14 January 2019 and 8 February 2019. Following another injury sustained, Karsdorp found his playing time, mostly from the substitute bench, as he continued to fight for his first team place, as well as, his own injury concern for the rest of the 2018–19 season. At the end of the 2018–19 season, he went on to make fourteen appearances in all competitions.