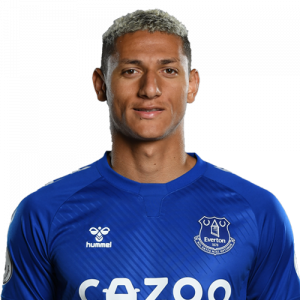 Richarlison de Andrade (born 10 May 1997), known as Richarlison , is a Brazilian professional footballer who plays as a forward for Premier League club Everton and the Brazilian national team.

He began his professional career with América Mineiro in 2015, winning promotion from the Campeonato Brasileiro Série B in his only season before transferring to Fluminense. He totalled 67 matches and 19 goals in his two years there, and was named in the Team of the Season when the club finished as runners-up in the 2017 Campeonato Carioca. He then signed for Watford, and a year later Everton.

At international level, Richarlison made his senior debut for Brazil in 2018, and was later a member of the team that won the 2019 Copa América.

Richarlison transferred to fellow Premier League club Everton on 24 July 2018 for a transfer fee starting at £35 million and potentially rising to £50 million, reuniting him with former Watford manager Marco Silva. In his competitive debut on 11 August, he scored twice in a 2–2 draw at Wolverhampton Wanderers. Two weeks later, he was sent off in the first half of a match of the same score away to Bournemouth for clashing heads with Adam Smith.

On 3 December 2019, Richarlison signed a new five-year contract with Everton. On 20 February 2021, he scored the first goal in a 2–0 win over Liverpool at Anfield, Everton’s first away win over their rivals since September 1999.

In May 2019, he was included in Brazil’s 23-man squad for the 2019 Copa América on home soil. In the final against Peru on 7 July, at the Maracanã Stadium, Richarlison came off the bench for Firmino in the second half and scored the final goal of a 3–1 victory from the penalty spot.