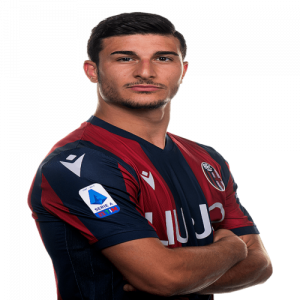 Riccardo Orsolini (born 24 January 1997) is an Italian professional footballer who plays as a winger for Serie A club Bologna and the Italy national football team.

Orsolini is a product of Ascoli’s youth academy. He made his debut with the first team in the 2015–16 season in Serie B, obtaining 9 appearances in the league.

On 30 January 2017, Orsolini joined Juventus on a contract until June 2021, for a fee of €6 million, plus an extra €4 million dependent on certain conditions. However Orsolini remains in Ascoli Piceno until the end of the season.

Orsolini moved back to Juve and then on loan to Bologna F.C. 1909 in a January 2018 after making just substitute appearances for Atalanta. The loan is for 18 months with an option to buy. On 19 June 2019, Orsolini signed a deal with Bologna and signed the club on permanent basis.