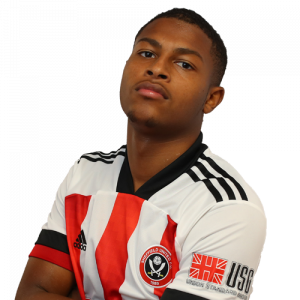 Rhian Joel Brewster (born 1 April 2000) is an English professional footballer who plays as a striker for Premier League club Sheffield United and the England national under-21 team. In 2017, he was part of the England squad which won the 2017 FIFA U-17 World Cup in India and was awarded the Golden Boot award for ending as the competition’s leading goalscorer.

In 2015, Liverpool signed Brewster from Chelsea following a recommendation by Beale who had taken up a position with the club. Brewster’s decision to make the move was motivated in part by his father’s influence who believed that he had a better chance of breaking through to the first team through Liverpool’s academy than Chelsea’s. He initially joined the club’s U18 side before being promoted to the U23 squad, where he scored on his debut against Ipswich Town. During his time with the club’s academy, Brewster was placed on a special training regime which included one-on-one sessions with former Liverpool and Real Madrid winger, Steve McManaman.

On 2 October 2020, Sheffield United announced the signing of Brewster from Liverpool on a five-year deal, for a reported fee of around £23.5 million. The deal includes a buy back clause of £40 million, valid until 30 June 2023.

Brewster is an England youth international and has represented the nation at various youth levels but remains eligible to play for Turkey through his Turkish Cypriot mother and Barbados through his Barbadian father.

Having previously represented England at U16 level, Brewster scored six goals in five appearances for England U17 in 2016, including a hat-trick against Croatia and a brace against Germany. He then led the nation’s attack at 2017 UEFA European Under-17 Championship and featured in the final against Spain. England ultimately lost on penalties with Brewster one of the players who missed his spot-kick. He ended the tournament with a return of three goals in six appearances.