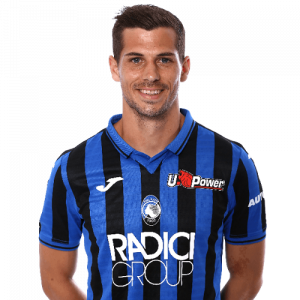 Remo Marco Freuler (born 15 April 1992) is a Swiss professional footballer who plays as a midfielder for Serie A club Atalanta and the Switzerland national team.

On 19 January 2016, Freuler moved to Atalanta for a €2 million transfer fee, and he made his Serie A debut on 7 February against Empoli. After being substituted off against Sampdoria the next week, Freuler was an unused substitute by manager Edy Reja the next seven matches until making his return to the starting eleven two months later against Roma. After the match, an Italian journalist gave him the nickname Iceman, which Freuler said was “because I was so calm on the ball”. He scored his first goal for the Bergamo side on 2 May against eventual runners-up Napoli.

Freuler made 29 starts in the 2016–17 season, in which Atalanta finished fourth in the table, a nine place improvement under first-year manager Gian Piero Gasperini. Atalanta also qualified for the group stages of the Europa League for the first time since 1990. Freuler found his name on the scoresheet five times, and also provided four assists. On 28 April, Freuler scored a late equaliser at home to eventual champions Juventus, derailing their chance to clinch the Scudetto that weekend.

Freuler made his first Europa League group stage appearance against English side Everton, playing the full 90 minutes in a 3–0 victory over the Toffees. He had previously played in a second round qualification two-legged tie against Scottish club St Johnstone for Luzern. He opened his scoring account in the 2017–18 season with Atalanta against Fiorentina, scoring an equaliser in the fourth minute of stoppage time on 24 September 2017.