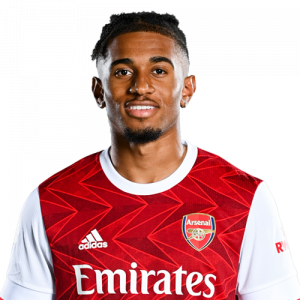 Reiss Luke Nelson (born 10 December 1999) is an English professional footballer who plays as a winger for Premier League club Arsenal.

Nelson was born in Elephant and Castle, London to a Zimbabwean father and English mother. He grew up in Aylesbury Estate in Walworth and attended the London Nautical School. He became friends with fellow aspiring footballer Jadon Sancho, who lived nearby, after they played together in youth tournaments.

Nelson joined the Arsenal academy when he was nine years old and made a great impression on youth coaches, regularly being moved up to squads above his age group. He played 35 games for the Arsenal youth teams, including nine games in the U-21 team, in the 2016–17 campaign. Following several impressive performances in the youth teams, he signed his first professional contract with Arsenal on 10 December 2016, his 17th birthday. Arsène Wenger included Nelson in the squad for 2017–18 pre-season tour.