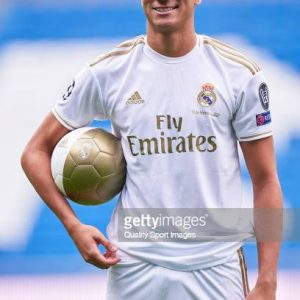 Reinier Jesus Carvalho (born 19 January 2002), known as Reinier and Reinier Jesus, is a Brazilian footballer who plays for German club Borussia Dortmund, on loan from Spanish club Real Madrid, and the Brazil national under-23 team as an attacking midfielder.

Early career
Born in Brasília, son of former futsal player Mauro Brasília, Reinier joined the youth academy of Vasco da Gama in 2011. He moved to the Botafogo and Fluminense academies before joining Flamengo.

Flamengo
Reinier made his senior team debut for Flamengo on 31 July 2019 in the second leg of Flamengo’s Copa Libertadores tie against Emelec at Maracanã Stadium. Flamengo won 2–0 and advanced in the competition on penalty shootouts. He made his league debut against Bahia the following weekend on 4 August.

On 9 November 2019, Reinier extended his contract with Flamengo until 31 October 2024 with a release clause set at €35 million.

Real Madrid
On 20 January 2020, Real Madrid CF announced that the club reached an agreement with Flamengo for the transfer of Reinier, who signed a contract until June 2026. He was assigned to their reserves for the rest of the season. The fee was around €30 million. On 7 March 2020, he scored his first goal for the Castilla against Coruxo.