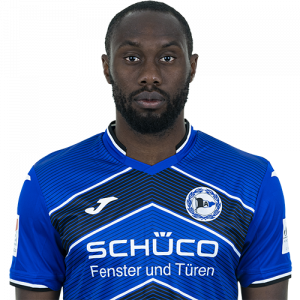 Reinhold Yabo (born 10 February 1992) is a German professional footballer who plays as a midfielder for Arminia Bielefeld.

Career
Yabo began his career with Teutonia Niedermerz and joined 2001 into the youth of 1. FC Köln. He was to begin of the 2009–10 season promoted in the A-Jugend Bundesliga West, but he earned his first game on senior side for 1. FC Köln II on 8 August 2009 against Fortuna Düsseldorf II in the Regionalliga West.

After four games more for the reserve team of 1. FC Köln he earned his first Bundesliga game against VfL Bochum on 16 April 2010.

International career
He was the captain of the Germany national under-17 football team at the 2009 UEFA European Under-17 Football Championship in Germany and won with the team the UEFA European Under-17 Football Championship. He played later in the year the 2009 FIFA U-17 World Cup and earned four caps in the tournament in Nigeria.