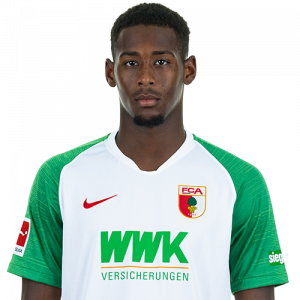 Reece Joel Oxford (born 16 December 1998) is an English professional footballer who plays as a defender for FC Augsburg. Oxford made his debut for West Ham United aged 16 years and 198 days, making him the club’s youngest ever player, beating a record of 16 years and 221 days set in 1922 by Billy Williams.

Oxford was born in Edmonton, London, and was a boyhood supporter of Arsenal. He began playing football at Tottenham Hotspur’s academy but was released from the club in 2011. He then joined West Ham United at under-13 level. He turned out for the under-18 team while still an under-15 schoolboy, and made the bench for a League Cup match in August 2014, still aged 15.

Oxford made his competitive, first team debut on 2 July 2015, aged 16, starting in midfield in a 3–0 win against Andorran club Lusitanos in a UEFA Europa League first qualifying round first leg tie. In so doing, he became West Ham’s youngest ever player. He then made his Premier League debut on 9 August, playing the first 79 minutes before being substituted for Kevin Nolan as West Ham won 2–0 away to Arsenal. Following his start, Oxford became the second-youngest Premier League starter of all-time, after Jose Baxter.

Ahead of the 2016–17 season, Oxford was named in The Daily Telegraph’s list of the best youth prospects in English football. On his 18th birthday, 16 December 2016, Oxford signed a new, four-and-a-half year contract with West Ham. Just over one month later, he was sent on loan to Reading for the remainder of the season. He made his Reading debut on 11 March 2017 in a 3–0 away defeat to Preston North End, coming on as a second-half substitute for Paul McShane. He made five appearances, his final match being the 8 April away defeat to Norwich City, 7–1.

On 21 June 2017, Oxford was sent on loan to Bundesliga club Borussia Mönchengladbach for the 2017–18 season. He did not make his debut until 28 October when he came on as an 89th-minute substitute for Lars Stindl in a 1–3 win against Hoffenheim. On 12 December, Oxford made his first league start for Gladbach, against Freiburg. After the match, sporting director Max Eberl praised Oxford’s development during his time at the club and stated exploratory talks had taken place over a permanent deal. His loan was cut short and he returned to West Ham on 29 December 2017.

On 31 January 2018, Oxford was loaned to Borussia Mönchengladbach again.

On 31 January 2019, Oxford again went out on loan, this time joining German team FC Augsburg until the end of the season. Oxford made nine appearances for Augsburg, his final game coming in the last day of the Bundesliga season in an 8–1 defeat by Wolfsburg. On 2 August 2019, Oxford joined Augsburg permanently on a four-year deal.