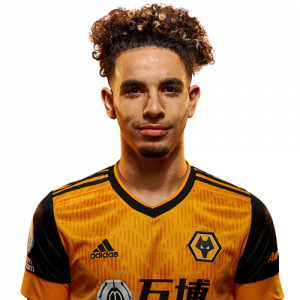 Rayan Aït-Nouri (born 6 June 2001) is a French professional footballer who plays as a left-back for Premier League club Wolverhampton Wanderers, on loan from Angers.

Angers
Aït-Nouri is a graduate of the Angers youth academy, which he joined from Paris FC in July 2016, despite interest from Southampton, in return for covering Aït-Nouri’s tuition fees of €5,000. He signed his professional contract aged 16 in February 2018 and made his first team debut as a substitute in a 1–3 loss to Paris Saint-Germain on 25 August 2018.

After making three appearances in the 2018–19 season, he became the team’s first choice left-back in the following season until breaking his jaw in a game against Nice in January 2020. At the conclusion of the French league season, which was ended early due to the coronavirus pandemic, he signed a new contract that was due to keep him at Angers until 2023.

On 30 October 2020, Aït-Nouri scored his first goal for Wolves, which was also his first goal in professional football, on his league debut in a 2–0 home win over Crystal Palace.