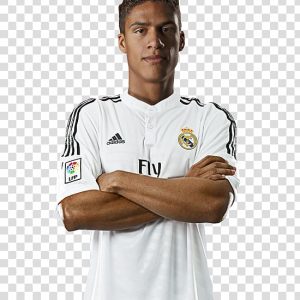 Raphaël Xavier Varane (born 25 April 1993) is a French professional footballer who plays as a centre-back for Spanish club Real Madrid and the France national team.

Varane previously played for French club Lens and, ahead of the 2010–11 season, began training with the senior team and appeared on the bench in several league matches. Varane made his professional debut in 2010 aged 17, in a league match against Montpellier. After one season with the French club, and as a professional footballer, Varane joined Real Madrid in the summer of 2011.

Since joining Real Madrid, Varane has made over 300 appearances for the club and has won 18 major honours, including three La Liga titles, one Copa del Rey title, four UEFA Champions League titles and four FIFA Club World Cup titles. At only 24 years of age, Varane won the UEFA Champions League for the third time, making him the youngest defender ever to have won the trophy three times, beating Paolo Maldini who was 26 when he won his third.

Varane was a France youth international, having earned caps at under-18, under-20 and under-21 level. He made his full international debut in March 2013 and represented the country at the 2014 FIFA World Cup, a tournament where he was nominated for the Best Young Player award. He won the 2018 FIFA World Cup in which he played every minute of every game.

Varane has been described by Lens youth coach Eric Assadourian as a “truly first class player” who is “comfortable on both the tactical and technical level”. He was called the best defender in the world by Fernando Hierro and José Mourinho in 2013 and 2014, respectively.

He was a regular starter during the league season, as Real Madrid won the La Liga title. During the Champions League, Madrid were eliminated in the round of 16 by Manchester City. In the second leg at the City of Manchester Stadium, Manchester, Madrid lost the game 2–1, with Varane being deemed to be at fault for both goals. The mistakes committed by the Frenchman were due to the high pressuring from Gabriel Jesus which led to Varane losing possession of the ball both times. He has since apologised for his mistakes.