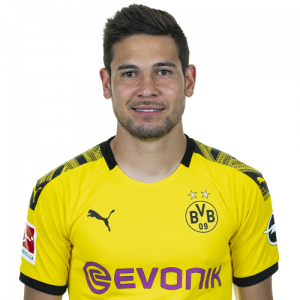 Raphaël Adelino José Guerreiro (born 22 December 1993) is a Portuguese professional footballer who plays for German club Borussia Dortmund and the Portuguese national team mainly as a left back but also as a left midfielder.

Born in France, he began his career at Caen, signing in 2013 with Lorient where he made his Ligue 1 debut. In June 2016, he joined Borussia Dortmund.

Guerreiro represented Portugal at under-21 and senior level, first appearing for the latter in 2014. He was part of their squad at the 2018 World Cup and Euro 2016, winning the latter tournament.

Borussia Dortmund
On 16 June 2016, Borussia Dortmund signed Guerreiro to a four-year contract for a reported fee of €12 million (£9.5 million). Under coach Thomas Tuchel, he was primarily deployed as a midfielder.

Guerreiro scored his first goal in the UEFA Champions League on 14 September 2016, in a 6–0 away win against Legia Warsaw in the group phase. In the 2018–19 edition of the competition, and also at that stage, he added braces in victories over Atlético Madrid (4–0, home) and AS Monaco FC (2–0).