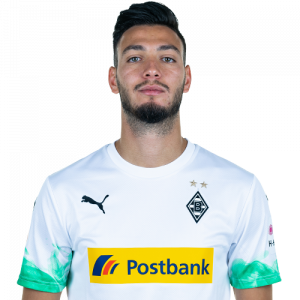 Amir Selmane Ramy Bensebaïni (born 16 April 1995) is an Algerian professional footballer who plays as a left-back or centre-back for Bundesliga club Borussia Mönchengladbach and the Algeria national team.

Born in Constantine, Bensebaïni began his career at Paradou AC, joining the youth team in 2008 and making his senior debut in 2013. In the summer of 2013, Bensebaïni went on trial with F.C. Porto and was later handed a two-week trial by English Premier League side Arsenal, during which he played in two friendlies with the under-21 team against Luton Town and Colchester.

In June 2014, Bensebaïni was loaned out by Paradou for one season to Belgian Pro League club Lierse. He made his full debut on 3 August in a league match against Club Brugge, coming as a 94th-minute substitute for Wanderson. Bensebaïni made 23 league appearances During the course of the season, scoring 1 goal, but could not help Lierse avoid relegation.

In June 2015, Bensebaïni was loaned out again by Paradou, this time to French club Montpellier for the 2015–16 Ligue 1 season.

Borussia Mönchengladbach
On 14 August 2019, Bensebaïni signed a four-year deal to join Borussia Mönchengladbach for 8 million euros to become the most expensive Algerian defender. He made his debut for the team in the Bundesliga as a starter during a win against 1. FC Köln. On 10 November he scored his first goal with his new club against Werder Bremen. In the same game he was sent off with a red card. He scored twice in a 2–1 win against defending Bundesliga champions Bayern München on 7 December 2019.