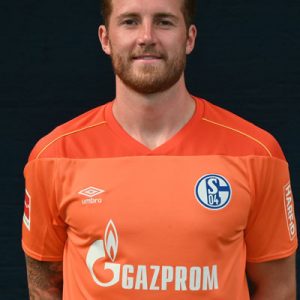 Ralf Fährmann (born 27 September 1988) is a German professional footballer who plays for Schalke 04 in the Bundesliga.

Fährmann made his professional debut for Schalke 04 on 13 September 2008 in 3–3 draw away to Borussia Dortmund. On 16 September 2008, he played his first international match, against APOEL in a UEFA Cup tie.

At the end of the 2008–09 season, he left Schalke and moved to Eintracht Frankfurt on free transfer, signing a contract valid to 30 June 2012.

Fährmann returned to Schalke in 2011 after the team sold Manuel Neuer to Bayern Munich. In the 2011 DFL-Supercup, Fährmann was named Man of the Match. After 90 minutes, the game finished 0–0 and it went on directly to a penalty shootout. Fährmann saved two penalty kicks, one from Kevin Großkreutz and one from Ivan Perišić, thus allowing Schalke to raise the Supercup trophy for the first time in the club’s history. In the start of the 2013–14 season, he was named second choice goalkeeper behind Timo Hildebrand. While Hildebrand was injured, he became the first choice goalkeeper and his impressive performances saw him keep the number one spot for the remainder of the season.

On 4 May 2014, Schalke announced that Fährmann extended his contract with Schalke until 30 June 2019.

Fährmann made his 200th appearance in all competitions for Schalke 04 on 18 April 2018 in a 0–1 home defeat to Eintracht Frankfurt in DFB-Pokal.