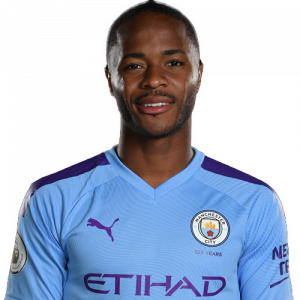 Raheem Shaquille Sterling (born 8 December 1994) is an English professional footballer who plays as a winger and attacking midfielder for Premier League club Manchester City and the England national team.

Born in Jamaica, Sterling moved to London at the age of five and began his career at Queens Park Rangers before signing for Liverpool in 2010. He was awarded the Golden Boy award in 2014. In July 2015, following a lengthy dispute over a new contract, he was signed by Manchester City in a transfer potentially worth £49 million, the highest transfer fee ever paid for an English player at the time. He then went on to help Manchester City win back-to-back Premier League titles in the 2017–18 and 2018–19 seasons. In the 2018–19 season, he was named to the PFA Premier League Team of the Year and won the PFA Young Player of the Year and FWA Footballer of the Year.

Sterling made his senior debut for England in November 2012 after previously being capped by England youth teams at under-16, under-17, under-19 and under-21 levels. He was chosen in England’s squads for the 2014 and 2018 FIFA World Cups and UEFA Euro 2016.

Sterling plays as a winger, attacking midfielder or striker, though he is more comfortable as a natural winger. Sterling has been praised for his adaptability and ability to play wide, at the tip of a midfield diamond and centrally, offering flexibility. Known for his pace, low centre of gravity, and dribbling skills, Sterling has been compared to Alexis Sánchez by his former manager Brendan Rodgers. Rodgers has also praised him for offering a “real threat,” his use of pace with composure and his maturity. Despite his small stature, he also possesses considerable upper-body strength, which aids him in withstanding challenges, and retaining possession.

Former Barcelona midfielder Xavi said in November 2014 that Sterling is good enough to play for the La Liga club, praising his physical and technical qualities. In April 2015, BBC Sport columnist Phil McNulty wrote that Sterling was “very good with the potential to be outstanding” but remained a “work in progress” due to inconsistent performances. He also wrote, “He is blessed with natural pace that makes even the best defences and defenders take a step back.”